I’ve been meaning to post these great photos from the performance at Rotherhithe for a while now but due to an excess of life Crossing Dartmoor had to be put on hold for a little bit. But now I’m back! And there are three fabulous photographs by the great Alexandra Waespi who photographs most of Bastard Assignments’ gigs (and now is also photographing Adele!) of this performance to give you just a tiny taste of the atmosphere of this one (click each photo to view large): 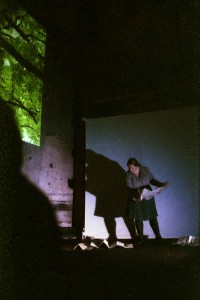 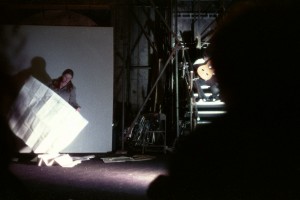 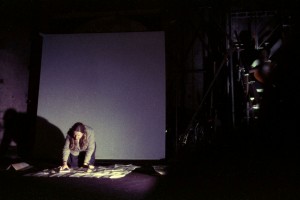 I’ve been gradually working on a new page for this site too to record the different ‘paths’ or configurations of the work at each performance – because Crossing Dartmoor is a flexible piece, every performance can be different so I feel it might be useful to have a record of which pieces were performed and the order they occurred in at each performance. Planning for this to be online soon… once I’ve worked out the best way to show overlapping elements and where they should start and end!

On the value of performing your own work

It’s been a rather manic few weeks here for Crossing Dartmoor as we hurtled towards the third performance of the piece in London – this time for Bastard Assignments: Fresh & Clean in the Thames Tunnel Shaft in Rotherhithe on Thursday 17 September.

With no piano in the venue and Simon unavailable to sing, I created a new arrangement for mezzo-soprano and guitar for this performance, yielding to suggestions that I should have a go at singing it myself, and working with guitarist Ashley Blasse. I also developed a new ‘path’ through the material to cater for a shorter timeslot and an audience who I knew would be open to the more unusual elements of the work.

This was a great chance to test out the flexibility of the piece, and I ended up setting aside three of the existing four sung pieces (two songs and the text score ‘Windsong’ which uses a folksong) and focusing instead on the text scores and audiovisual media.

This Rotherhithe performance has really cemented the place of the new content I created for the theatrical production in the work. Both the video elements and the text score ‘Drawing Out’ (amplified drawing of a Dartmoor scene via contact mic) worked extremely well, with the latter in particular receiving a very enthusiastic response this time round. For this performance, I allotted it a longer duration, we were able to pump more volume thanks to Ashley’s provision of a larger amp than we’d had before, and I gave it a more prominent position in the path – first up, combined with both a video and a field recording. I think all of these worked in its favour and allowed it to shine.

Performing the piece myself has been a very valuable exercise too. While I’m no rival for Simon in the singing stakes, doing it myself made concrete some things that as a composer I could only imagine. Those long gaps in the vocal part are a bit abstract until you find yourself on stage with nothing to do in them, and I felt a strong need to find something that would make me feel relevant in these gaps.

To do this, and to smooth transitions between pieces, I found myself drawing on some of the elements Omar developed for the theatrical production. Watching the videos and messing about with maps – but the theatrical approach also leaked into how I considered the relationship between videos, field recordings and live performance.

My original concept had been that the videos and field recordings would be presented as performed pieces within the work – no overlap, they would appear in sequence in much the same way as if an oboist had stepped forward to play a solo in the middle of the performance. I may still try this out, but for this show I wanted to experiment a little with layering up sounds and playing around with how that layering affected the perception of duration. I started to look for points where crossfading between videos and fading field recordings in or out would make some sort of dramatic sense, even though I wasn’t thinking of this as a staged production at all.

Of course, the sacrifice for performer-side knowledge like this is the eternal problem of the performing composer: you lose the experience of being an audience member, which provides a different type of information. But I’m glad I did it because the experience has provided yet more useful information for the development of the piece, and particularly for staging the piece, even in a formal recital context. 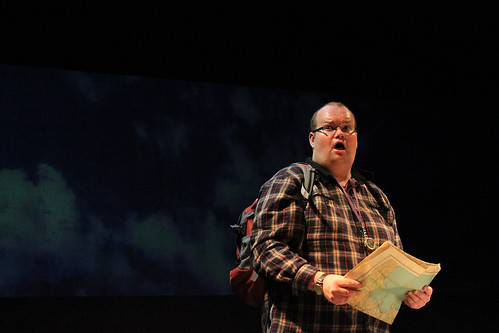 So, the video of the production is great, but these photos of our production at the New Diorama Theatre by the fabulous Claire Shovelton are just as exciting for me – beautiful and mysterious and really evocative: 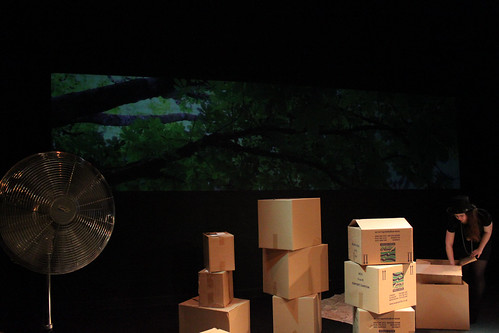 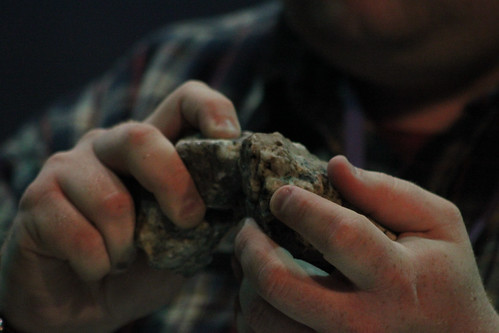 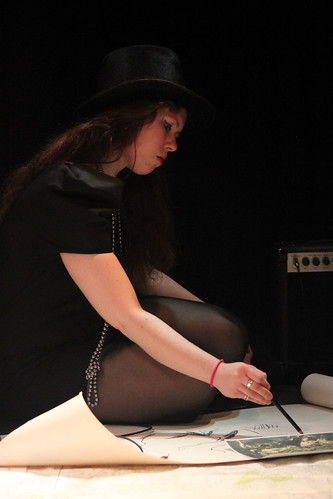 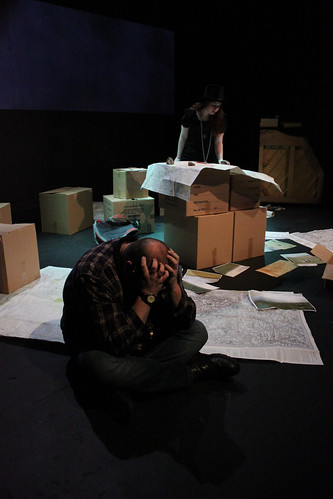 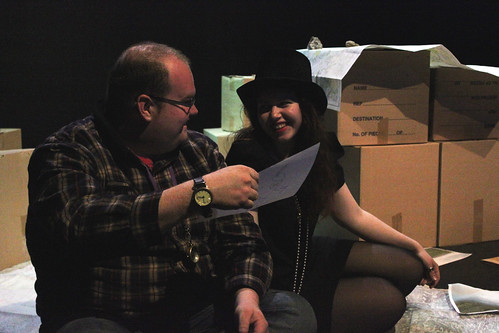 Aren’t they great? These are just a few of the great set of photos of the production, and I really urge you to and check out the full set on Flickr as they’re really amazing.

Plus, she took this lovely team shot of us at the end of our run-through! Left to right are: Omar Shahryar, director, Simon Oliver Marsh, tenor, Alexandra Kremakova, piano, and Caitlin Rowley, composer & producer: 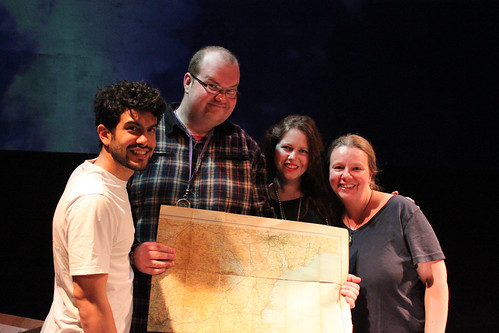 So thanks to Claire and to Tête à Tête for arranging for her to be available to us (and all the other productions in the festival!). We’re all delighted with how these turned out!

Firstly, we’d all like to say huge THANK YOU to everyone who came along to our performances of Crossing Dartmoor at the New Diorama Theatre – we really hope you enjoyed the production!

Now that these performances are done, we’re deep in admin-central-aftermath territory. Returning props, considering outcomes, reviewing audience feedback. Most excitingly we get to relive the whole thing without the performance-day jitters through the wonder of online video! Tête à Tête very kindly film all the performances in the festival and it’s always great to be able to look back over a show, as well as have the opportunity to give those who couldn’t be there a glimpse into what it was like. The performance in this video was the first show on Saturday 25 July, and it’s looking great!

And of course, huge thanks, too, to Arts Council England and the National Lottery for funding this performance at the New Diorama Theatre, to Tête à Tête: The Opera Festival, King’s Cross and their Artistic Director Bill Bankes-Jones for their support and encouragement, and to Sound and Music for the Francis Chagrin Award they gave me to help with the costs involved in creating the field recording sections of the work (which haven’t come through very clearly on the video but I’ll be posting the recordings from the show on SoundCloud soon).