Wind sounds, sheep and a clarinet in the wilderness 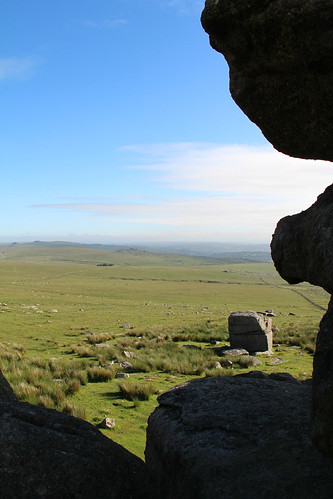 I’ve been experimenting with ways to capture the sound of wind over the past couple of days. Wind is a real feature of Dartmoor, as much as the granite tors and the ponies, but recording the sound of wind is a real challenge (as opposed to having recordings messed up by wind hitting the microphones directly, which is outstandingly easy). Yesterday I was experimenting up at Little Mis Tor by attaching my Røde M3 microphone to my recorder and recording from within crevices in the rock, which I think has been quite successful, although I’ll need to listen to the result on the proper speakers I have at home to be sure.

Today presented a different option though. I took the parents off to Drewsteignton to find Castle Drogo, but owing to finishing up at Wistman’s Wood later than planned, and the travel between Two Bridges and the castle taking far longer than anticipated, we arrived to find the castle all shut up for the evening. However, the benefit of this, of course, was that everybody else had gone and as the grounds aren’t locked up at night, we drove up to see what we could see. Imagine my delight to discover a fantastically tall line of trees (basically a 30-foot hedge) which caught the wind with a marvellous rustling sound, while blocking most of it from the area I was standing in. So I just had to make some recordings there and I think I’m going to be pleased with those too.

And yes, Wistman’s Wood actually happened today. I’ve captured some interesting video footage, but sound recording was hampered by high winds and some intrepid rambler playing a clarinet. Very nice indeed, but not quite what I was after…

I’m super-pleased that I’ve managed to capture some sheep sounds on this trip. Random bleats are very much part of the soundscape of the moor, but last time I was here, the sheep were very shy and I failed to record any at all, so I’m delighted to finally have some sheep-sounds to play with. 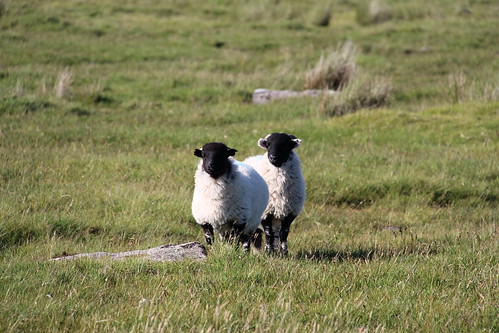 Dartmoor is famous for a number of things: beautiful bleak landscapes, the Hound of the Baskervilles, a very imposing prison… and its highly changeable weather. Today we experienced the last of these – and to such an extent that we were totally unable to experience either 1 or 3 and had we encountered 2 we’d never have seen our doom approaching. Today was a day of FOG. Lots and lots of fog. Also enough significant drizzle that standing a camera out in it to video stuff seemed like a seriously stupid idea.

So Wistman’s Wood was off, although I did go a little way down the start of the path to capture this proof: 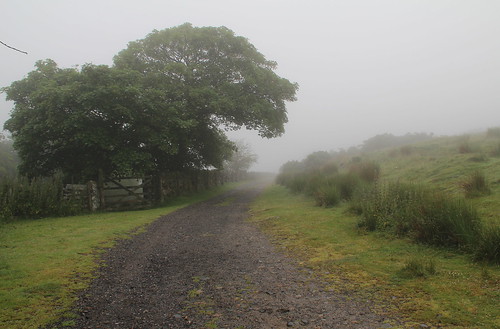 and met two extremely sodden walkers returning from the wood with dripping wet-weather gear and muddy boots and looks of determination that said clearly “there’s a warm pub just over there” which just confirmed our decision to not go there at all today. The rain likewise made recording sounds challenging what with the drippings out of the sky and general dampness, so we decided to show the parents the very imposing prison instead and headed off towards Princetown.

Normally the very imposing prison looms at you from the skyline from quite a distance away. Today though we saw… fog. No landscape, no prison, and then “oh, is this Princetown??” and we were there. But we could barely even see the buildings by the side of the road, so gave up and went for a Sunday roast at a pub instead.

Of course, being Dartmoor, in the afternoon all the fog lifted just too late to be useful, yielding this: 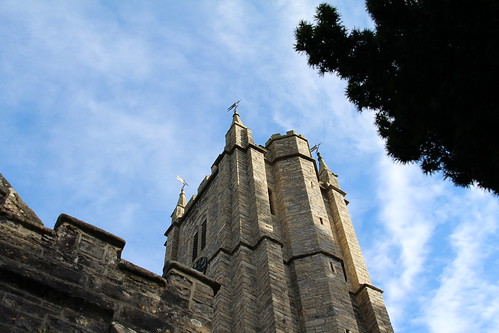 Uncle Tom Cobley and all

First full day on Dartmoor today and the work is somewhat underway. Today was a bit of a family day though, as I’ve brought my parents along to show them this wonderful place, and my partner has joined us just for the weekend, so today was less about the remote areas and more about doing some things together, interspersed with a bit of video work and refamiliarising myself with the moor, its sounds and its moods.

It’s ended up being a bit of a Widecombe Fair day, though. This famous Devon folksong is used in Crossing Dartmoor as Simon’s chosen song for the text score ‘Windsong’. Today we visited Widecombe-in-the-Moor itself. No Fair, alas (it happens in September, apparently), but there was a market selling very nice goats cheese and honey fudge, which was some compensation. The sky was being gorgeously cloudy, so I took advantage of family members exploring the church to test out a video concept which I’m quite pleased with. The tripod makes a massive difference – amazing how much less disturbing it is when the patch of sky you’re looking at in a video doesn’t visibly wobble about! – but I think I need to do a bit more experimenting with the video settings on the camera to be sure it’s not automatically adjusting anything I don’t want it to. I think the wide-angle lens I’ve borrowed from my partner’s DSLR is making a real difference with the feel of the video than using my own lens, so I’ll probably stick with the one large lens for the rest of the time we’re here.

Particularly notable at Widecombe today were the birds (rooks? Something black. With wings. Sorry – I’m no good at birds). They had colonised a large tree about a field away from the churchyard and were making the most marvellous racket. Absolutely stunning. And then as I was packing up my video gear, they all took off and flew to another tree about 2 more fields away, and the sound moving with them was just beautiful. I didn’t make a proper recording of them because a) it would have been impossible to get a clean recording without tourist noises all over it and b) I want the sounds for the performance to be genuine remote-location sounds, away from the towns, but here’s a tiny clip of them shouting away on the soundtrack of my sky video:

In the afternoon we visited Finch Foundry up near Okehampton which unexpectedly turned out to be the resting place of one Thomas Pearse (d. 1875), supposedly (according to the National Trust) the ‘Tom Pearce’ of the song.

I did record a few sounds here – if you’re ever passing by, you should visit if only to hear the water-powered steel hammers in motion! – but just for my general collection rather than for Crossing Dartmoor.

Tomorrow, though, the real work begines: I’m heading back to Wistman’s Wood for video and field-recording duty. Hoping it won’t be swarming with tourists. Or if it is that they’re super-quiet ones! 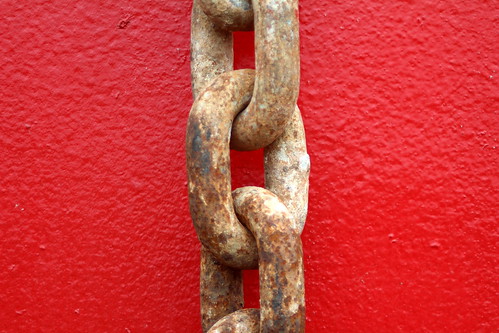 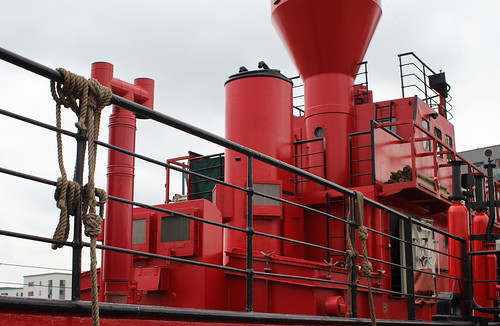