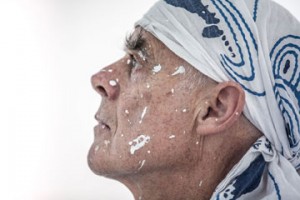 Photo: Steve Jackson. Courtesy of the artist and Lisson Gallery

Richard Long has been in the vanguard of Conceptual, Minimal and Land art in Britain since he created A Line Made by Walking in 1967, while still a student. This photograph of the path left by his feet in the grass, a fixed line of movement, established a precedent that art could be a journey. Through this medium of walking, time, space and distance became new subjects for his art. From that time he expanded his walks to wilderness regions all over the world. He mediates his experience of these places, from mountains through to deserts, shorelines, grasslands, rivers and snowscapes, according to archetypal geometric marks and shapes, made by his footsteps alone or gathered from the materials of the place. These walks and temporary works of passage are recorded with photographs, maps and text works, where measurements of time and distance, place names and phenomena are vocabulary for both original ideas and powerful, condensed narratives.

Richard Long was born in Bristol, UK in 1945, where he continues to live and work. He studied at West of England College of Art, Bristol (1962-65), then St Martin’s School of Art, London (1966-68). In 1969, Long was included in a seminal exhibition of Minimalist and Conceptual works entitled When Attitude Becomes Form at the Kunsthalle Bern for which he made a walk in the Alps that was documented by his first text work. After 1969, Long began making journeys and sculptures in wilderness places all around the world, documenting his walks with photographs, maps, and text works. In the 1980s, Long began making new types of mud works using handprints applied directly to the wall. He also continued to make large sculptures of lines and circles from slate, driftwood, footprints or stone, often sourced from quarries near the exhibition sites.

Major solo exhibitions include Hamburger Bahnhof, Berlin (2010), Tate Britain, London (2009), Scottish National Gallery of Modern Art, Edinburgh (2007), San Francisco Museum of Modern Art (2006), National Museum of Modern Art, Kyoto (1996), Philadelphia Museum of Art (1994) and Solomon R. Guggenheim Museum, New York (1986). He represented Britain at the 37th Venice Biennale (1976) and won the Turner Prize in 1989 after being shortlisted four times. He received the Chevalier de l’Ordre des Arts et des Lettres from the French Ministry of Culture (1990), has been elected to the Royal Academy of Arts, London (2001), was awarded Japan’s Praemium Imperiale in the field of sculpture (2009) and was made a CBE in 2013.